Today I got sent a link, about a risky play place in North Wales. It got me thinking about the things I got up to as a child and what Z won’t get up to, as one, it’s most probably not acceptable for him to be doing these things and two if he got up to half the things I got up too, I’d be the worst parent ever! Not that I ever got into trouble, I was never naughty, I didn’t want to get in trouble, so I was good!
I was discussing something similar with J not so long back and her sister. In conversation, I said when Z got to a certain age, I would like to build dens and start fires with him. The start fires gave me glares. I don’t mean take him to the nearest field, and say quick light this, i want him to be responsible. Understand that fires are dangerous. So, when the time comes he’s not going to want to mess about in a field and start a fire that quickly spreads out of his control. I want to take all the sense of excitement out of a box of matches or a lighter. So when the time comes that his friends are wanting to do these things, I’m hoping he’ll be able to stop them.
I want to be able to take Z on walks like I remember my both nans doing with me, exploring places, climbing things like trees. Yes, I can take him to a park and let him run and climb the equipment, but what equipment in parks is there to climb today? Z is like I was at his age ( or so I’ve been told! I didn’t get my scars from sitting playing nicely!) he wants to run, jump and climb. He’s mastered this at two and a half, what fun is a playground going to be to him in a few years? 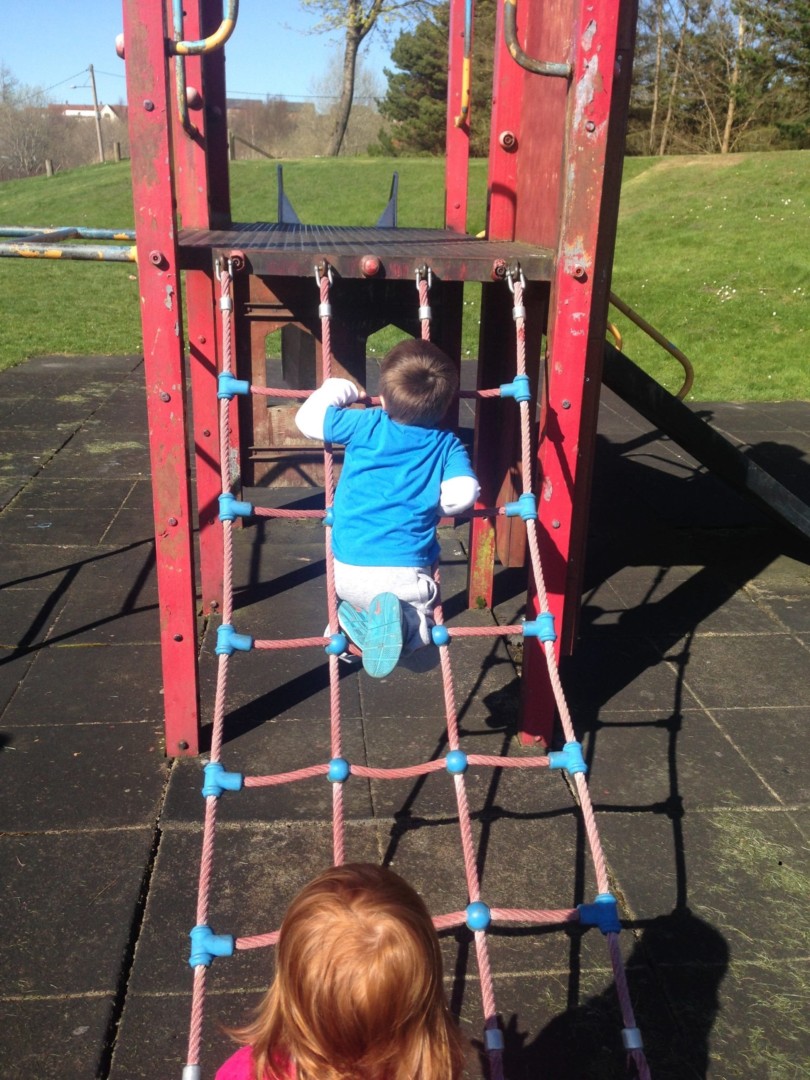 Being his mother I need to give him opportunities to do this as safely as I can. But how do I do this? He has a swing and slide in the garden. The only think that I have are steps. Oh, let’s let him play on the steps. I did as a child, but if I fell it was put down to learning, now if Z fell I’m the bad parent for allowing him to climb the steps on his own.
So are children nowadays becoming too independent on their parents always watching them? Always telling them no. No climbing, no running, no jumping, I don’t often say no to Z for these things. The girls at play group are used to him now, but at first it was he’s going to fall, he’s going to hurt himself. But I can say he’s learnt how to get down off things without hurting. He will go down a slide arms first as he knows he can support himself, the few times he’s gone sitting down his feet have caught and he’s been lucky not to go head first. That’s just his way.
I have no idea where I am going with this post, now, I’m thinking of how I can help Z. How can I make running, jumping and climbing fun.
How he can take these risks and be safe. He loves his little skates I got him. He falls he gets back up. Maybe I’m trying to teach him a bigger lesson, that you can fall any time in life but you can always pick yourself back up?
Life is all about risk taking, if we take that away from toddlers and children what  adults are they going to become? You have to take risks in life. If I didn’t take risks in life would I be where or who I am today?